Its been a huge few weeks of packing and unpacking and settling in to our new house.  I am exhausted to say the least.

My fabric and other assorted crafty stuff has been reappearing from storage and is now up in my room. Unfortunately thats is as far as its gone as I haven't had the time or energy to deal with it.  Have to have it set up by early August when my crafty girlfriends come over for our regular get together.

This is what it looks like at the moment. 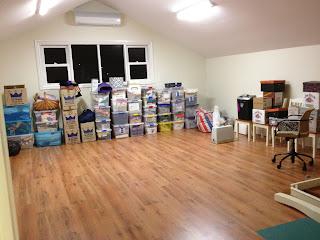 And thats just the stuff you can see in the pic!!  There is more!!

That white thing near the bottom right hand corner is actually a table that I haven't even put together yet...lol.  At least I have chairs!

I am curiously not feeling very craft minded at all at the moment.  I am sure its just tiredness and that once my room is up and functioning I may never come out again except to eat and pee...ok and maybe take the kids to school.

Been ages since I posted, we have been flat out getting ready to shift house.  Among the preparations has been the dismantling of my sewing area which is a bummer but necessary.  We have a fantastic house to move into and I have the most amazing sewing room in it. Here is a before picture. 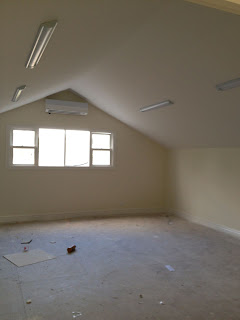 Those fluro lights are going light that room up for sure!!  I get my own split system heater/cooler too.
See my house blog if you want a better look.  Two weeks to go and we are in.
Posted by Linni at 9:20 pm 1 comment:

No idea at all what week we are at with the quilt along but I am just plugging along getting my blocks done.

Today I have finished Block 96 Tulip.  This was a pretty quick block to do and I quite like how its turned out. 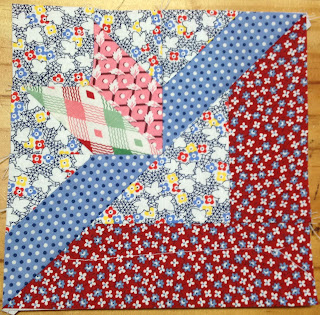 Block number 97 is called Waste Not.  I had already printed out the paper piecing pattern when I realised that I should have reversed the image.  Taking the blocks name into account I decided to use the pattern I had printed as well as print another reversed image.

Have been sewing again today so decided to post straight away.

Earlier I was chatting about how to set out the quilt and when I worked it out I need 144 blocks, 72 on point and 72 square.

So I went through the patterns for the 111 blocks provided and worked out how I would place each.  Some blocks I have done twice, either because I forgot to reverse them, they were original hand pieced ones or I just didn't like the first version.   I really don't want to use the two latter types of blocks but the reversed blocks are no problem.   So I need to find about 30 or so other blocks to add in.

I am going to do a second version of some of my fave blocks in the book but I don't really want to have heaps of repeats.   I went trawling through the meagre supply of block books I still have here at our rental and came across a Carol Doak book I got for Christmas.  It has 300 block patterns which is fantastic.  They only have numbers for each block not names which is a bit of a bummer but also allows me to make up my own names.  Ok I could go and google each picture or something similar but that wouldn't be as much fun now would it?

This first block is from the FWS book called Temperance Tree.  It made me think of my late father Jim.  When he was 12 the Temperance Union came to his school and he signed a pledge to abstain from alcohol until he was 21.  He kept his promise and was never a big or regular drinker.  When we cleared out his house we found a cask of port with a 1979 expiry date among other bottles of wine and spirits that were clearly beyond consumption.  Why he kept them is anyone's guess but he obviously didn't check out his drinks cupboard very often.  LOL  I still have his pledge certificate, its a huge elaborate thing about A3 size.  When they gave out certificates back then they sure knew how to do it right!


This second block is from Carol Doak's book 300 Paper Pieced Quilt Blocks.  Its quite an amazing book with a CD that allows you to change the size of the blocks.
Anyway I chose block 278 but have changed the name to Geese in Pud's Garden.

Who is Pud and why are there geese in her garden I hear you ask?   Ok I didn't actually hear you but I am sure you did!

Pud (also known as Sue) is married to my eldest brother (I have a few) and they have 4 acres about an hour or so from where I live.  Pud is her nickname from her side of the family.  Anyway they have all manner of animals wandering around, geese, ducks, guinea fowl, chooks, peahens, guinea pigs, birds, turtles, rabbits, sheep, cats and a massive dog that I am sure the kids could ride if he would only stay still long enough.

This is Pud/Sue and I preparing for the 2011 Melbourne Marathon 10km run. Thats me on the left btw.  We didn't actually run the course, get serious we would have been in the ambulance after the first km. We walked the whole thing at a fast pace....then a medium pace, then a "I'm just going to put my head down and get to the end if it kills me" pace.  We took so long they were taking down the marker posts as we were approaching them!  It took us 2 hours and 38 minutes but dammit we did it!  This year we are doing the 3km walk instead!  ROFL 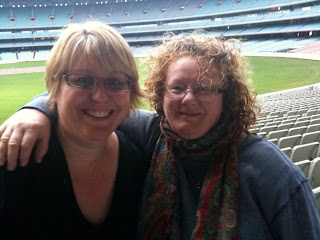 Pud/Sue may be my sister in law but she is also one of my best friends.  She is a very talented crafter, be it stamping, embroidery, or quilting to name a few. She is a bit nuts but so am I.   We have a lot of fun together and are both enablers for each others worst habits....not sure this is a good thing though!  LOL   When we get a chance to hang out this is usually what we look like: 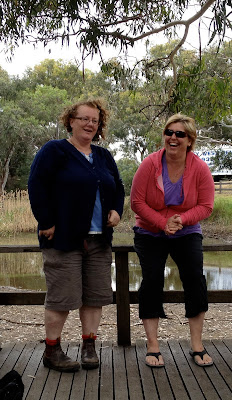 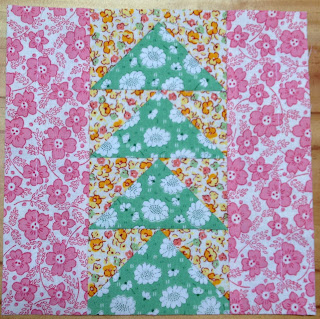 While I have been working on my farmers wife sampler I have also done more blocks for my pony club quilt.  I've had two BOM parcels for this so far and these blocks are from both parcels.  They are sent out in order of the letters in the book rather than in alphabetical order as the farmer wife sampler was.

I am enjoying these blocks so far but am definitely concentrating on getting the farmers wife sampler finished before I turn my full attention to it.  I like the bigger blocks alot.
Posted by Linni at 11:04 am No comments:

Really have to work on keeping track of what week this quilt-along is at!!

Its school holidays here in Melbourne and for us its a chance to kick back and do as little as possible.  It feels like during school term we are so busy running around to different activities that we don't get time to spend at home just playing.   So other than our week at the beach and a few days of get togethers with family and friends we have just hung out.  The boys have been having a ball on the water slide we bought their father for his birthday last week.  Yep he is my biggest kid.  Unfortunately he is too big a kid for the slide so he has had to miss out on the fun.

Right now back to the Farmers wife Sampler.

Here are the blocks I have finished since my last post.

Getting close to finishing now which is pretty exciting and also a little daunting.  Now I have to put it all together!!
I have been debating just how to do it and what layout to use.  Although I like the sashing that Laurie has used on the original quilt its not what I want to do.   Debating using this layout by Michelle from the City Studio.  Just need to pick a background fabric.  White makes the most sense but I want to use this quilt on my bed and a white quilt anywhere near a male is not a great idea.   I have pink/purple/blue/green and yellow moda 1930's solids so I could choose one of them.  I would need to buy a few more yards of it though.  Yellow would work I think.  Decisions, decisions, decisions!
Posted by Linni at 10:57 am 1 comment:

Really wanted to do this quilt, had intended on splitting the blocks up to make a quilt each for my young sons.  I thought it would be great for them but they weren't interested.

So instead I have started it using Batiks as a BOM from Homestead Hearth.   So far I have received the fabric for 10 blocks but have only managed one.  They are a great size at 8 1/2" and very easy to make.  Paper piecing them again and haven't printed up more foundations so thats why only one block!!  LOL

Linni
I am a happily married stay at home mum of four. Discovered quilting about 14 years ago and have never been the same since.